‘It tastes…’ I stop, mid-sentence, and take another sip. I’d committed that naive sin of just lobbing the first sip of this new beer down my throat, trying to keep up with the conversation rather than taking time out to enjoy the beer. The beer, deeply gold in the glass, aroma all yeasty spice, pear-drop aroma and muscular, warm sweetness, has knocked my senses sideways a little. I take another sip. ‘It tastes a little like…Duvel?’ I’m conscious that I’ve inflected the word Duvel upwards; completely underestimating the beer at hand. The beer at hand, by the way, is Brass Castle’s Heretic; a saffron-infused strong golden ale in very much the Belgian tradition. And it’s wonderful.

Quite a few of these moments occurred during the afternoon spent at BeerTown in Malton this weekend. Pleasant surprises, little re-adjustments of your senses, those ‘I’m glad we came‘ kind of moments. It’s not unusual to be enjoying good beer in this small Ryedale town; Suddaby’s, sitting behind the Crown pub, had been serving solid, tasty beers for some time. But Suddaby’s is no longer in Malton itself – and punters waiting for a new brewery to champion since then now have two to crack on with.

Malton – sitting just north of York and 30 miles or so from the long shadow of Tadcaster, was home to both the Rose, Russell and Wrangham breweries – with Russell’s being founded in 1771. As is often the way, mergers and buy-outs led to the demise of all three, and Malton became one of these towns whose residents get used to saying that brewing ‘used to be’ part of life here. 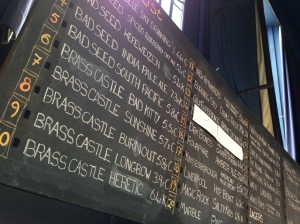 I say this with authority, but I’m happy to admit that I hadn’t heard of the Wrangham or Russell breweries before. I steal the Bad Seeds themselves –  Chris Waplington and James Broad for a quick chat  over the small -but- perfectly-formed – exhibition of salvaged breweriana in one of the rooms just away from the hustle of the main festival, and soon realise that…well, I’m not alone.

‘We just wanted to bring something back to Malton,’ smiles Chris. ‘Malton is a beer town, and hopefully we can be part of it in the future.’ It’s as simple as that; but it’s one thing to say it, and another to do it – Brass Castle and Bad Kitty all deserve a pat on the back for making it happen. Chris and James shoot off to carry on working, and leave me (and Chris, my beer-buddy) to pore over the tin adverts for Roses’ King’s Ale, dark, regal and forthright in a cut-glass goblet, and listen to how Russell’s were told to stop using a triangle logo by a certain Burton brewer – settling on a much less litigious horseshoe instead.

So what of the modern Beer Town?

Pleasantly busy without being cramped all afternoon, Malton seems ready for a new celebration of beer. Try as I might to find a demographic here, it’s pretty tough – young and old, male and female, cask and keg. Again, this itself shouldn’t be a surprise; Malton hosts one of the most talked about food markets each month, and prides itself on being a ‘foodie’ town. And having Bad Seed and Brass Castle in residence , teaming up to bring you some of their favourite beers as well as showcasing their favourites, only heightens that. It’s the missing part of the jigsaw.

Since the success of Bad Kitty (a multiple award-winning porter doused with Vanilla that doesn’t last long whichever bar it appears on) a few years ago, the Pocklington brewer, now relocated to Malton, have become a local hero of beer drinkers in north Yorkshire. Part of me wants to say that Brass Castle play to a different audience than Bad Seed, but after tasting Heretic and their accomplished Brass Lager (Vienna style; all subtle breadiness and grassy snap to finish), I don’t think I can.  Phil Saltonstall and Ian Goodall have taken every step of Brass Castle’s development in their stride, moving from solid cask ales to kegged esoterica without losing any of the initial promise and quality that Brass Castle promised.

Bad Seed – all hand-printed labels and primary colours – stand out a mile off on the bar. But, as we all know, eye-catching design ain’t worth a damn if the beer ain’t good. We don’t have to be concerned about that; Bad Seed’s beer is very, very good. They may not have the reach or profile of many of the region’s young start-ups, but thier hit rate is scary. Bad Seed Saison is one of my favourites in the UK, all crackle, zip and zing; South Pacific Pale Ale a fresh, gooseberry-led pale ale that is impossible to stop at one with. Hefeweizen in a triumph of sweet lemon, banana and clove wrapped up in a crisp, refreshing jacket.

I could go on. There wasn’t a bad beer in the bunch, to be honest (well, the Spiced Blueberry Oat Ale was a little rich – a good Christmas beer, perhaps, guys?) – and rest assured, dear reader, I did sample judiciously. Celt Experience’s Native Storm (4.4% abv) put the bitter in Bitter with an all-out attack of super-fresh cut Seville Orange slapping you in the chops. Liverpool Craft Beer Company’s Hop Beast (4% abv) turned out to be a gently floral, sweet and well-brewed amber ale with the potential to be a real summer sessioner.

Weird Beard’s Little Things That Kill (both sating my thirst and taking me back to my teens) and Tiny Rebel’s Full Nelson are as reliable as they are tasty – both in cracking condition, too – and a thumb to those who say that lower-strength Pale Ales are dull. Magic Rock’s Salty Kiss leaves the lips tingling (no sniggering at the back, please) and palate re-charged.

Add in brass bands, impromptu bluegrass concerts, delicious baked goods (always a bonus!) and excellent staff (well done, all) and you’ve got a local beer festival that’s a cut above. One that Malton deserves? Yep, I think so.

BeerCast was also in attendance, and you can read Rich’s version of events here. There’s some bits and bats on Malton brewing here. And Mart – if you’re reading – it was great to catch up.

Posted in beer in yorkshire

Whilst in Edinburgh this summer I embarked – over a breakfast, of all things – on a rant about the proliferation of Saison and ‘Quasi-Saison’ into the market this year (apologies still to Craig, Chris and Sam who had to sit through it). I don’t rant much (on here, anyway), but I had gotten a little sick of the tang of Saison yeast being thrown into anything (especially IPA) and the beer being labelled as such. Don’t get me wrong; I’m all for bending the rules from time to time, but the core of my rant was that I just craved tasty, simple, herby Saison. It may be a matter of semantics for some, but for me it was as simple and as selfish as that.

In fact, it got me down so much I was actually avoiding beers with the ‘S’ word on the label or pumpclip. Until Bad Seed’s Saison (6%abv) arrived in my hand and gave me my faith back. The beer pours cornfield gold; and I sat and took in the aroma for what seemed like an age – lemon rind, a hint of vanilla, the citrus-spice of raw ginger. On the sip, it was smoothly sweet until a rush of dry, coriander and pepper heat swipes the malt away at the finish, which is gentle; risingly bitter with a fresh, grassy herbal note. The alcohol is well hidden although there’s a faint warming note after the sip, which only adds to the robust-yet-light feel of the beer. Complex? Yes. Easy – drinking? Certainly? Well-brewed? Resoundingly so. No bells and whistles; just a bloody good Saison.

Bad Seed are based in Malton (famous for its food festival – and of course being the birthplace of my dog, Wilson!) and haven’t been going that long – James Broad and Chis Waplington only set up in the summer – but their beers are already garnering some formidable buzz. What struck me the most – once I’d gotten past the initial pleasure of the beer in the glass in front of me – was how clean the beer was; how well brewed it was. Small needn’t be a byword for lazy in terms of the condition of your beer, no matter how ‘innovative’ it may be in terms of flavour. No such qualms from Bad Seed. Go buy some.