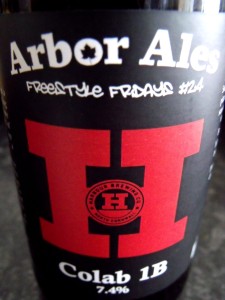 In a tenuous link to the last post, I tasted Harbour’s collaboration with Arbor (that gets confusing after a while…), 1B. Clocking in at 7.4% abv, it’s not one to be trifled with. The label proclaiming it to be a Belgian Brown Ale, conceived during Arbor’s ‘Freestyle Fridays’, where essentially they take a day off and brew what they want.

More on that later. 1B is slightly Dubbel-esque inasmuch as it’s big, brown and boozy – although the formula has been distilled down to the bare bones of the style. There’s brown sugar, raisin and some banana on the nose, and that overall profile carries onto the taste – which is smooth, sweet and rich. Some alcohol heat makes an appearance at the end, which brings the abv into sharp relief -but overall it’s a fun, boozy beer. Seek it out if that’s your thing but be quick.

Bristol-based Arbor have been brewing since 2007 by all accounts, but I was only made aware of them early last year; their quirky range of largely single-hopped beers recalling a southern Mallinson’s to my Yorkshire eyes. They seem to work with what’s available and, the occasional underconditioned bottle aside, make good, solid beer with excellent hop presence. Looking back , they’ve collaborated with other local breweries and generally had fun.

I spent a weekend drinking an armful of Arbor’s beers last spring, but never got around to reviewing them, despite me taking the obligatory picture (that happens all the time, let me tell you!).

Given the variance that the range has there’s almost no point now – the beers simply won’t be around.  Aramis, Full of Beans (A smoky, smooth dark mild with coffee), Brigadier Bitter and Olympic – themed Black IPA 2012 were all guzzled with varying results, but Yakima Valley IPA was wonderful – and the one I’ve picked up every time I’ve seen it since. Sweet, amber and full of boiled-sweet body and a wonderfully floral/grapefruity nose makes it incredibly familiar and satisfying. If you’re going to choose one Arbor Ale to seek out, make it this one.

Arbor are currently undergoing a rebrand, and they are certainly one UK brewery that I think will come out on the other side of that stronger for the effort. The potential is there; and with a business (which is what a brewery is, let’s not forget) that’s half the battle. One to monitor.