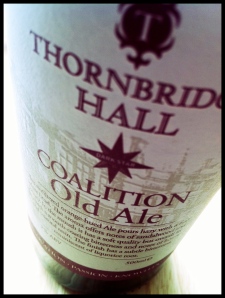 Brewed in 2009, Coalition Old Ale (7%abv) is the result of a collaboration between the Thornbridge and Mark Tranter from the ever-excellent Dark Star . I first tried this beer a few months back, at one of our fabled bottle-swaps, courtesy of those kind chaps Andy and James of SummerWine Brewery. As I sat and tasted mine, I was very aware of how I’d probably need another chance to try it to really form an opinion of it; I certainly wasn’t expecting the kind of beer that it actually is. Not sure why, I just expected something darker, smokier, and stronger in alcohol.

Luckily, Hopzine Rob and Baron Orm rushed to my aid, and I managed to get my hands on another bottle – and I’m glad I did. Coalition Old Ale is an exercise in subtlety; a real class act. Firstly, there’s that colour – hazy Amber, bright and…well, vibrant. Not the look of a beer dormant since 2009. The lasting, substantial head is the only giveaway to the age; slightly tobacco-hued, not quite white. The taste is softly sweet, with only the slightest hint of resinous wood (pine?) floating around underneath.
There’s a little spice – Cinnamon, perhaps – and then comes along those flavours you’d more typically associate with ‘Old Ales’; some raisin, some bitter cherry, a hint of almond. The finish ramps up the bitterness, and the beer ends up with a really satisfying Orange note, drying the palate and making it a surprisingly moreish beer. The alcohol is only gently warming, and Coalition is well worth seeking out if you can. A beer to be sipped and savoured, for sure. 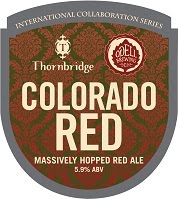 …So last night we dined with with Thornbridge at The Cross Keys. Given how awesome the Flying Dog event was a few years back, I’ve been waiting for one of these nights to come up again, and after missing the last few, I was pleased that Thornbridge had been lined up. The staff at The Cross Keys do these events very well; pleasant, knowledgeable staff, and fantastic food. As the courses came out, we were guided along by Caolan Vaughn, one of Thornbridge’s brewers. 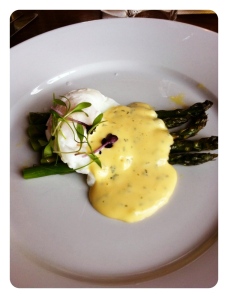 We kicked off the evening savouring Jaipur (or ‘Jaips’, as I have been led to believe is the correct name for it ‘on the street‘). Smoked Nidderdale Trout and Chive Mousse, nestled on a small pastry case, provided some light snackage, giving a little more sweetness to Jaipur’s (5.8%abv) wonderfully rounded, soft bitterness. I always find smoked fish a bit tricky to match beer with, and it certainly provided a little inspiration.
Tender-as-you-like-it Asparagus with a Mint Hollandaise and a Poached Egg arrived at our table next, and again the accompanying Wild Swan (3.5%) proved a simple yet effective bedfellow; lower in complexity and strength than Jaipur and working well with the subtle mint notes of the Hollandaise. I’m a fan of Wild Swan; a great quaffer when the weather gets a little warmer.
Chilled Cucumber Soup didn’t hit the mark for me; it was over-seasoned and nowhere near cold enough. Luckily, Chiron (5%abv) provided an ample distraction. Again, one of those simple-yet-perfectly-balanced Pale Ales that Thornbridge do so well, it was on excellent form; a slight Orange Zest coming in late to provide a bit of a different angle to the bitterness. 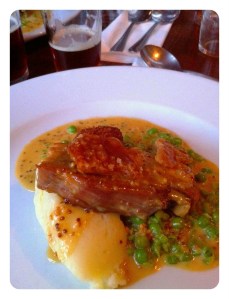 The ace in the pack was undoubtedly the Slow Roasted Pork Belly with Crushed Peas. Served with a scattering of perfectly crisp Skin, sitting on a bed of Mashed Potato and slathered in Honey and Mustard Sauce, it cried out for an excellent beer to go with it. The pork was meltingly tender, and the salty crackling and sweet-yet-piquant sauce worked wonders. Colorado Red (5.9%abv) proved to be the perfect partner for it.
This is a great, great beer. Brewed with Doug Odell, it does a Trans-Atlantic feel about it; Rich Red colour, that trademark US sweetness in the body; all toffee, hard candy and brown sugar, but finished with a really peppery, almost noble hop aroma as opposed to the citrus hop attack you almost expect. The body’s not as rich in mouthfeel as you think, and it’s incredibly easy to drink. I do feel that Odell’s beers – although generally excellent – are moderately ‘safe’ and a little ‘straight down the middle’ – and CR is a great little twist on their style, something a little different. Colorado Red and the Pork were made for each other, and it truly hit the spot. I almost don’t want to say it; but I’d really like to try CR on Keg, too. 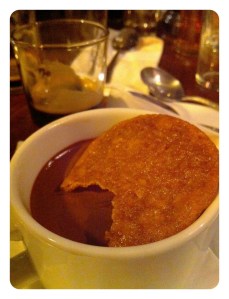 After all that sweetness, a little Lemon Tart freshened things up; only to serve as prelude for the main dessert: Bitter Chocolate Mousse served with a Honey Biscuit, and washed down with Bracia (9%abv). I say ‘washed down’ but that’s not entirely accurate; one doesn’t ‘wash down’ Bracia. The chocolate mousse served only to enhance the rich, bitter chocolate notes of the beer, and the Honey Biscuit just put a sweet edge to that slightly smoked, slightly phenolic note that it carries. Glass-coatingly thick, Bracia put a rich, decadent end on the evening. I certainly slept well last night, and that’s high praise indeed.
Thanks to all involved for a great evening. 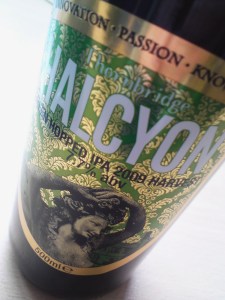 In praise of Thornbridge; I can’t say enough. For me, they remain at the very forefront of brewing in the UK, consistently brewing top-quality beers that not only challenge, but satisfy at the same time. They must be close to being the most-blogged about brewery out there too, so I know I’m not alone in my blind love for Kelly, Stef and the team.
In fact, Stef was recently named UK Brewer of the Year, which is just the icing on the cake and a massive acheivement not just for Stef but the entire Thornbridge team. For a personal toast, I popped up to Beer-Ritz (where else?) and stocked up on Halcyon (7.7% abv). It’s my current favourite Thornbridge Beer (although that changes with nigh-on each new one I taste) and perfect for a toast.
Russet-amber in colour, and topped with a head that lasts and last, the beer is a lesson in balance: a sweet, honeyed body that supports a fruit-burst of hop aroma (Grapefruit, Gooseberries, even some Strawberry in there) and a long, smooth sip that hits you right at the end with a juicy, bitter hit. It’s green-hopped, and you can tell when it’s a fresh batch; Green is an apt word to describe the overall hop profile. I could drink this all day and never be bored with it (until they brew something new, anyway).
So well done, Stefano – and keep up the good work. You’re making this guy very happy indeed.

>Well, it’s that time of year when I cast my mind back to what we’ve tasted, seen, and cried our way through in 2009.

My Blog of the Year spot goes to Thornbridge’s brewer’s blog. I like the simple design; the articles are always interesting and present a nice mix of brewing inside-knowledge, know-how, and personal experience. As a budding microbrewer myself, this aspect really interests me – I’ve really enjoyed following thier exploits in brewing and running a growing business throughout the year. For me, Kelly and the gang are always happy to share their experiences, which is again sometimes lacking in the brewer/blogger relationship. Blogging should be embraced by brewers – we are, after all, the beer drinkers that take time to shout from the rooftops our love of their product. And I do love Thornbridge’s beers – to me, they represent a vibrant, young, questing set of brewers who represent this country at the highest level. British Brewing dull? Not these guys. So well done, Thornbridge, and I look forward to drinking in 2010 with you – mine’s a pint of Kipling.

Other honourable mentions go to the ever-excellent Boak & Bailey, Zak Avery’s YouTube Vlogs (still effortlessly head and shoulders above the rest – and apologies for not making the TNP tasting – I was busy failing my driving test) and The Beer Nut, which is consistently engaging and honest. 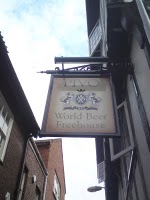 My Beer Venue of the Year award goes to Pivo, a great beer bar in the middle of York. I’ve always said that York is a real hotbed of great, solid English pubs and beer – and having a little slice of international craft beer on the scene ices the cake, really. It’s very small, but perfectly formed. I’m going to find it hard to visit York without dropping in from now on.
Kudos to Leeds Brewery for opening The Brewery Tap, which brews its own Leodis Lager on site. I’m not massively enamoured of the beer, but I like the idea. What about a Koelsch for the summer, guys? 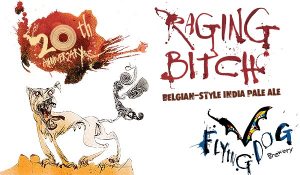 Beer of the Year – always a tricky one. This year I’m copping out with a tied #1 spot for Flying Dog’s Raging Bitch – which managed to be the hoppiest beer I think I’ll ever drink and yet retain excellent balance – and Nogne-O’s IPA – another masterclass in balance between hops and body. Thanks for the memories, guys.
Also memorable were Dark Horse’s Hetton Pale, Orkney’s Red Macgregor, Dogfish Head’s Johnny Cask, Taddington’s Moravka, Sleeman’s IPA, Stone’s Levitation Ale ,Meantime’s London Pale and Young’s Special London Ale, which I am finding is taking my addiction to one type of beer to a whole new level. Wonderful beers, them all. 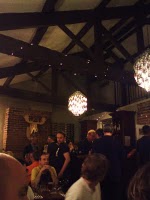 Beer Event of the Year goes, without a doubt, to Flying Dog’s tasting, which happened at The Cross Keys in September. The full post is here but it made such a nice change to go a well run event, with great hosting by James Brophy, and meet so many great people who are passionate about beer. Thanks again to all involved. North’s Orval & Cheese day was random-yet-inspired, and The Barge and The Owl in Rodley ran their annual beer & music festival to even greater numbers than last year, proving that the appetite for family-oriented community beer events is still there. Well done, lads.

Next Year? Well, more of the same I hope. I’m getting married in September, and my honeymoon will take in Milan, Florence, Venice and Verona – so I’m hoping to finally fill that black hole I have in my knowledge about Italian Craft beer. If anyone has any pointers for me, drop me an email. Can’t wait.