You have to face it; Timothy Taylor’s beers are seen as somewhat untouchable in certain parts of the country –and for good reason. Landlord is viewed by many as a high-water mark in Brewing, and is without a doubt there Holy Grail for Homebrewers (of which I am one). Ram Tam has attained almost cult status in Yorkshire; one of the few beers in the country truly worth travelling for. Timothy Taylor’s humble brewery is one of beer’s unassuming gods.
I was certainly excited when they announced, early in 2008, that a brace of new (or rather, one new and one re-imagined classic ale) beers would be brewed to coincide with their 150th Birthday. Havercake Ale, named after a nickname for the Duke of Wellington’s 3rd Battalion for which Taylor had an affinity, would be brewed for only the third time in Taylor’s history, alongside Celebration Ale, a new recipe. I must, absolutely must, taste these beers, I thought at the time.

But then, as often happens, real life got in the way. A hectic period of work meant that the trip to my favoured Taylor’s inn – The Fleece, in Haworth, had to be delayed by a week – and this was disastrous. When I finally got there, the barmaid apologetically informed me that all the Havercake and Celebration Ales had run dry. In fact, had just run dry. Excursions to other Taylor’s pubs yielded similar results. I was running round Yorkshire, always one step behind this elusive beer. I gave up. I resigned myself to the fact that I had missed the boat. Lesson learned, young drinker.
Fast-forward a few months to October 2008; we’re in Haworth again. After a pleasant stroll through Bronte country, we popped into The Black Bull for a pint of Ossett’s Silver King, and then, purely out of habit, dropped into the Fleece. Whilst lifting my lips to the first sip of fresh Landlord, my eyes caught something on the back of the bar. A box. A presentation box. With a bottle each of Havercake and Celebration Ale gleaming within. I felt like Indiana Jones faced with the Crystal Skull. Needless to say, it was bought and promptly cellared; kept away for a special occasion: the first beer of 2009.

Celebration Ale poured a clear-as-a-bell amber colour, and the main difference between it and other Taylor’s beers, in my opinion, was the nose: sweet honey and floral hops all round. A robust, typically Yorkshire biscuit malt body gave way to a long bitterness as you’d expect to find in bottled Landlord. Celebration Ale is a much easier-drinking, almost summery beer, and one that I can heartily recommend to Taylor’s nerds. 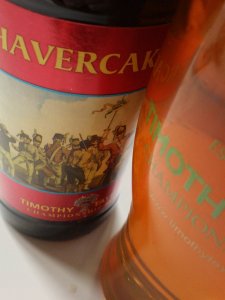 Havercake Ale, upon pouring, doesn’t seem that different, but the nose gives it away: much less hop profile, and an almost soapy note hang in there. The head did not hang around long on my sample; but the beer itself was malt all the way, with a much softer, less assertive bitterness than the Celebration Ale. As it turns out, quite a contrasting beer.
I understand both beers to have been a success around the country and I think they’ll be popping up now and again in the future. I hope so.