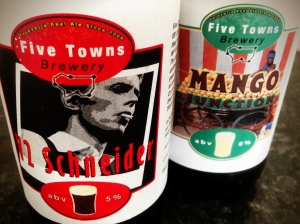 I first interviewed Malcolm Bastow (who is, ostensibly, Five Towns Brewery) back in 2010; his amazing work rate – and hit rate – being the main factor to me contacting him. As it’s often mentioned in conversation about one of Yorkshire’s most cult breweries, he doesn’t actually do this full-time. But make no mistake, we’re not talking home – or cuckoo – brewing here. Five Towns is a fully-fledged brewery, with casks of delicious, delicious beer rolling down his drive and into our pubs and bars.

If you can find it, of course. Five Towns’ beers are culty, in so much as that you need to really go to certain pubs to get them often, but when you do, you make sure you have one. There’s no gimmick, no marketing, just beer. I’ve yet to come across a drinker (or brewer, to that end) who doesn’t talk in reverent tones of Malcolm’s work. Why? The beer is packed with flavour. It may be odd to hear me make such a simple statement, but, in much the same way Oakham and Bristol Beer Factory manage to do, Five Towns beers may appear simple on both the clip and description, but that only serves to lull you into a false sense of security. The beer in your glass, swirling with intent just after being poured, will give your  tastebuds a workout.

Like many, I’ve been imploring him to bottle for a while, so was over the moon when not only did bottles appear recently, but my favourite (of all things, a Dunkel) was included in that range. Mango Junction (6% abv) pours a rich, burnished gold and the nose is full of sweet, dense fruit sugar – like sticking your nose into a jar of Apricot Jam (or should that be Mango Chutney?). The beer starts off smooth, then sweet with the same fruit-led profile as the nose, before drying…and drying…and drying to a big, bitter finish. It’s like a Fruit IPA, I guess – brewed with a complete lack of fanfare. And it works. It’s delicious, and I immediately wanted another one.

V2 Schneider (6% abv) blew my socks off at a beer festival a couple of years ago and it hasn’t changed one bit. Yorkshire’s only regularly produced Dunkel (and please, correct me if I’m wrong) is a complete bullseye; deep mahogany in hue, thick, luscious tan head, and plenty of obligatory banana and clove notes in the nose. Sipping reveals further complexity; some sour cherry, a little cola. It’s big, brown, boozy and complicated. Seriously good stuff. Gimme more.

So, I’m off to go buy some more. What more can you say? Sometimes the underdog, the guy who works hard cranking out beers with no bells and whistles, wins. Sure, the beer may stay local, but that just means you have to go to it, rather than let it come to you. Do the legwork, and you’ll be rewarded. I’ll say the same thing I said in 2010; Malcolm, please ditch the day job and scale up. Please!

You can read my 2010 interview here if you like. Here’sa nice article from the Wakefield Express, too. And yes, Malcolm is still working full-time! If you’re out and about, I can also heartily recommend both Niamh’s Nemesis and Peculiar Blue in particular.