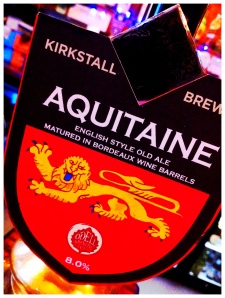 When Doug Odell visited Leeds at the back end of Summer, he swung by Kirkstall Brewery to get a brew on, as they say. It would seem brewers brew even on their holiday. The result, with more than a little help from Dean Pugh at Foley’s, was Aquitaine (8%abv), an old ale-style pint aged since then in Bordeaux casks.

So-called because of the association with the wine-producing region of Bordeaux, Aquitaine turns out to be perfect for this time of year. It smells – frankly – of Red Wine. There’s a hint of vanilla in there, some wood, and that intense red-fruit-cherry-skin one gets from good Reds. On the sip, the beer is at first sweet; full of biscuity malt and heavy body, but then evens  out with an intense, dry, green-hop hit. There’s a pleasant oily-pine note running through it, like a seam of freshly cut wood, but it’s really well-balanced for the abv, and one to savour rather than gulp.

We all know Kirkstall don’t put feet wrong with their interpretations of solid styles such as Three Swords Pale and Black Band Porter. Aquitaine hints at mastery behind the scenes, and the promise that seasonals and one-offs could be just another card up Kirkstall Brewery’s sleeves.

Aquitaine is currently on the bar at Mr Foley’s. Do hurry if you want to try it – it won’t be on for long.