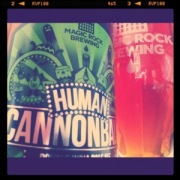 Well, just as I’d finished drafting this post, The Golden Pints were announced for 2011. Given that I’d already done this, I’m going to post it up anyway in lieu of a Golden Pint list, with a few additions.  Anyway, I like lists, and it’s been fun running through what beers I’ve particularly enjoyed over the year. By way of a cop-out, I’m not going to rank the best beers this year, because I think they are all fantastic. What’s even more exciting is that I’m sure I’ve missed loads; which means 2012 will have to rectify that.

So, what about a Brewery of the Year? A difficult one. When I think of Breweries that made 2011, three stand out for me; Magic Rock, Buxton and Red Willow.

Given the shared experience of the people involved – both from a brewing and a retail point of view – Magic Rock would have had to have really worked hard to fail. Their relatively small core range covers every base, their pumpclips catch the eye; and their beer tastes good. When you really get into the range, the beers are deceptively simple, too. They’ve worked their arses off; doing countless Meet The Brewer nights all over the country, brewing to capacity, and even introducing a couple of new beers in Rock Star and Bearded Lady. But that Yorkshire grit and no-nonsense approach is still there. No fuss – just taste – and lots of it.

Buxton pull a similar ‘one foot in each camp’ trick but go even further. It’s been a while since I’ve seen a brewery combine fairly hop-forward, or ‘big’ beers such as Axe Edge or Tsar, and yet appeal to the average ‘pub-bound’ drinker. Buxton do this by again turning down the fuss, and just brewing tasty, tasty beer. People that know me know that I’m a Pale Ale freak, and when Moor Top emerged – just a single-hopped, simple Pale Ale – it blew me away (See also Hawkshead’s superlative Windermere Pale and NZPA). You think you’ve seen it all from a style, and then another taste comes along that make you realise that the genre is not dead. Buxton are a brewer for all camps, and one that’s already been popping up on many ‘best of’ lists already. 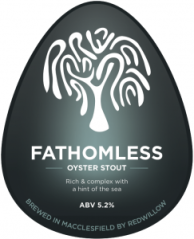 Finally, I have to mention RedWillow. I know how hard Toby works, and trust me, the guy is a machine. A tired, Oyster-shucking machine – but a machine nontheless. Red Willow flip the previous statements made about Buxton and MR around; simple-sounding and looking beers that reveal hidden depths and innovation when tasted. Fathomless – turns out to be an authentic Oyster Stout. Ageless – turns out to be one of the most aromatic, juicy-tropical-fruit bombs tasted all year. The awards have slowly, slowly begun to trickle in for the Macclesfield brewer, and I’m sure 2012 will only result in a bigger award cabinet being needed.

Beers of the Year

Ok. As I said above, I can’t pick one, really. Here are the ones (in no particular order) that I really enjoyed, from reasons such as taste, to simply being the right beer at the right time. If your beer is on here, then thank you for brewing such Good Stuff.

Of course, I’ll have missed some out. It’s impossible not to. If your beer has ended up on this blog, however, then it’s The Good Stuff, rest assured.

I’d also like to take the opportunity to thank Mark and Andy for organising the year’s Twissups, and Luke Downing at Dough Bistro and Nick and Vickie at Homage to Fromage for opening their businesses and kitchens to the possibilities of Food and Beer. Dean Pugh at Mr Foley’s remains a constant source of info and orchestrator of some excellent bottle-swap nights (and Wing nights, and NFL nights!), and IPA Day was a great (and quite drunk) event. We are very lucky indeed. Of course, all the staff at BeerRitz have been stars, as always. We are lucky to have such a place in Leeds (and we almost didn’t for a while; thanks again, Zak!)

Blogs? Well, there’s been some great blogs starting up or coming into their own in 2011. For me, Ghost Drinker and Beersay deserve special mentions, as they bring an enthusiasm and exuberance about beer onto the screen that is sometimes sorely missed from blogs. On the other side of the coin, ATJ’s and Zak’s blogs always provide food for thought from inside the industry and I’m glad they’re still churning out quality content after all these years. I appreciate how hard it can be to blog these days when juggling (a number) of jobs and when I see others doing it, it just spurs me on to quit moaning and get writing.

Finally, I’d just like to thank everyone that reads TGS, and that I’ve had the pleasure of sharing a few beers with over the year. You’re a good bunch, and despite the bickering (which makes it interesting, let’s face it) I’m happy to be part of such a vibrant, varied and passionate community. Hopefully, 2012 will be an interesting year for me, and I hope to be able to contribute to UK Brewing in a way that I know many of you do, day in, day out.