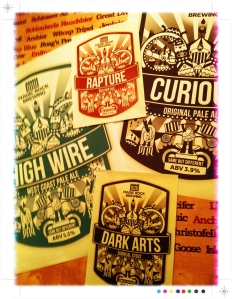 North Bar held the official launch of Magic Rock’s beer last night; the first time that the fledgling brewery’s beers have been poured in the city. Given that Magic Rock are the brainchild of the Burhouse Brothers (of MyBreweryTap fame), I knew that the beers would be good – or rather I hoped that it would be the case – and I wasn’t disappointed. Head Brewer Stuart Ross has created a super-strong core range of beers, with something for everyone.

If I could boil it all down to one thought, I would say that MR brew uncomplicated but massively tasty beers. This quality is what sets apart the best brewers in the UK today – in my opinion the likes of  Dark Star, Kernel and Buxton – from the rest. Personally, I’m much more impressed by how much depth and flavour you can get into a low-strength Pale Ale over 12% barrel-aged Black Saisons these days. Maybe it’s a reflection of the no-nonsense personalities of Richard, Jonny and Stuart coming through in their beer.

So, onto the beers. Curious (3.9% abv )is the flagship Pale Ale; simple, tasty, fruity and with a surprisingly dry finish, its perfect for this time of year. Rapture (4.6%abv) was my personal favourite; a US style ‘hoppy red ale’ with masses of toffee in the body and a dry citrussy finish. Highwire (5.5%abv) is an amped-up version of Curious; stronger, sweeter and with a much more pronounced tropical-fruits hop profile; Cannonball (Double IPA, 7.4%abv ) is an amped-up version of Highwire – got that? Everything’s turned up to ten with Cannonball, and there will be another version of this coming along soon, so keep an eye out. Finally, if Pales aren’t really your thing, Dark Arts (6%abv) is a simple yet tasty Stout that drinks nowhere near it’s substantial abv – plenty of smoky woodiness in the body, but with a lovely little hint of Blackcurrant running through it. 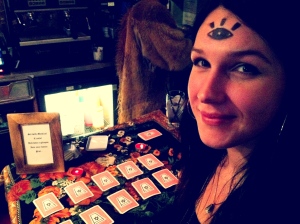 So, something for everyone. North did an excellent job of entertaining the masses with the place decked out in Circus (Magic Rock’s theme) style; a charming Tarot Reader helped you choose what beer you should try if you were dithering at the bar, and the stiltwalking, fire-breathing, Crotch-grinding girls (yes, I just said that) kept everyone suitably amused. The beer flowed and popcorn was consumed. You’ll be able to try Magic Rock’s beers throuhout Leeds (Foleys, North and The Fox & Newt for sure) over the next few days, so make sure you do. You won’t be disappointed.