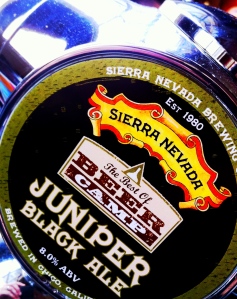 Well, here’s something you don’t see often. A few precious kegs have found their way from Sierra Nevada’s esteemed Beer Camp to Leeds, and there was no way I was going to miss out. Although a quick internet search tells me there has been some limited-edition releases of this beer, there’s still enough of the exotic about it to make trying it an event; something that one-off beer should always have in thier locker.

Obviously, the downside of ‘special’ beers is that they can often come laden with so much hype that they disappoint; Juniper Black Ale (8%abv) does and more. I’d call it a Black IPA but it’s much softer than that label would suggest. The tan head tells you it’s laden with dark-and-roasted-malt goodies, and the aroma manages to pack a hefty wallop of tropical fruit in on top of any coffee or bitter chocolate you might have been expecting. It’s really, really light – which is proof of the balance of the beer – despite being filled with soft, rounded, full vinous notes. The finish just reasserts some black coffee notes, but the finish is clean as well as drying. However,  I didn’t get much Juniper in it, to be honest. That aside, it’s a fantastic beer, and is on now at Mr Foley’s. Part of me doesn’t want to tell you about it, simply so I can go drink some more of it this week. Here’s what Ghostie thought.