>The Session: My Favourite Beer

This month’s Session concerns my favourite beer.
My favourite Beer is Sierra Nevada Pale Ale. It may be uncool to say that, as a Brit – moreover, as a northern brit, surrounded by such good ale, but it’s true. I am a certified Americophile (if that’s a word). In my teens as a wannabe writer, my heroes were Charles Bukwoski, Hunter Thompson and Norman Mailer. Musically, I mostly listen to Americana, with Iron & Wine, Ryan Adams, Calexico and Richmond Fontaine usually on standard rotation on my Ipod. I love dusty pictures of roadside motels and diners (something you just don’t get over here), and in almost all artistic aspects of my life aside from sport, America plays more of a role than the UK. I don’t know why – I’ve even never visited the place.
In much the same way, the USA informs my love of beer. Like I said above, despite being surrounded by such great beer, I always find myself leaning toward the craft scene of America for kicks. Brewers like Dogfish Head, New Belgium and Rogue seem so experimental, so different that when I visit my beer supplier I can’t help myself but load up on what’s new from the Land of Hope and Glory (TM).
Even in homebrewing, something I am becoming increasingly more immersed in, my first beer wasn’t an ESB, or a London Porter; It was a California Common – using Anchor Steam Beer as a template. I think this all stems from my Sierra Nevada Pale Ale obsession.
I remember the first time I tried it. It was chosen simply on the colour of the label and design of the logo – and that I was pig-sick of lagers, or rather, what we call lagers in the UK. Upon pouring it, I smelled the sweet, bitter tang and knew that I was on the verge of something new. But nothing could prepare me for the taste. 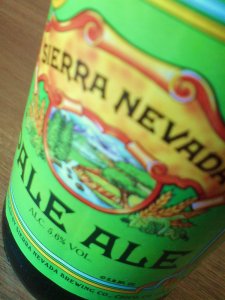 On the sip, a decent, malt-biscuit body subsides to reveal flavours of – at first – boiled sweets and candy to me. Sweetness subsides to that famous Hop profile – lots of citrus, lots of pine. Then comes the bitterness, just enough to leave a long, dry finish that results in a massively moreish beer. Serve it colder and it’s sparklingly thirst-quenching; serve it warmer and it’s even more complex. Perfectly balanced, you wouldn’t believe it’s actually 5.6% abv.
I still stock up on it, and it’s my ‘go-to’ beer if it’s on tap somewhere. Just to try it. Just to see how they keep it. I’m like a crack whore with SNPA – I could be faced with a thousand taps and I would choose one beer that I have not tried and one SNPA.
It’s not just me – I can honestly say I have converted more people to beer via SNPA than any other beer. Many of my convertees now lap up real ale from good, honest UK micros all having their tastebuds exploded open by the ray of Californian Sunshine that is SNPA. Sierra Nevada are no longer small, or even ‘cutting edge’ now that the rest of the US has caught them up. It may not be esoteric, ‘extreme’ or even cool in this country – But SNPA is my favourite, desert island beer. Without a doubt. For me, and I suspect many others around the world, that first sip of SNPA was the start of something special.